The American-French philhellene, Sophie de Marbois-Lebrun (1785-1854), was better known as the Duchess of Plaisance. She supported the military needs of the Greek national struggle and she continued her social contribution in the first years of the Greek state, by taking care of the education of daughters of revolution fighters.

A Duchess with an eccentric personality

Sophie de Marbois-Lebrun was a French noblewoman, known as an important figure in Greek high society the first decades after the Greek Independence. She was born in Philadelphia, Pennsylvania, where her father, François Barbé-Marbois, was serving as French Consul-General in the United States. Upon the outbreak of the Greek War of Independence, the Duchess and her daughter generously supported the Greek cause and in 1830, they moved to Nafplion, the capital of Greece at that time. She became an ardent financial supporter of public education. She was reacquainted with the Greek leader Ioannis Kapodistrias, whom she had met in Paris in 1826. Eventually, she became an opponent of him, and after a 17-month stay, she left for Italy. When Kapodistrias was assassinated by Konstantinos Mavromichalis and his nephew Georgios Mavromichalis, she spoke out against the way Kapodistrias had run the Greek government. In 1834, the Duchess returned to Greece and settled in the new greek capital, Athens. She purchased large amounts of agricultural land chiefly near Mt. Penteli, but all around Athens. She engaged the Greek architect Stamatios Kleanthis to design a palace for her on the slopes of Mt. Penteli. 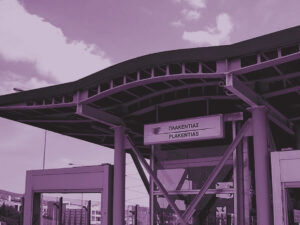