Samuel Gridley Howe was one of the most iconic figures in American history in the emancipation of the colored in the United States. Born in 1801 in Boston, he studied medicine at Brown University and later at Harvard.

The “Lafayette of the Greek Revolution”

Samuel Gridley Howe was born on Pearl Street in Boston, Massachusetts on November 10, 1801. He didn’t remain in his birthplace for long after graduating. His problem was that he had fallen in love, but that love affair didn’t go well so Howe was disappointed. He needed to leave, do something important and change a page in his life. So after his studies and influenced by the writings of Lord Byron, he set sail for the revolted Greece to offer his knowledge handling the weapons as well as the scalpel. In 1824 he arrived in Greece to serve in the revolution as a surgeon but his duties were of a more military nature. In 1827 he returned to the United States to raise money to buy ammunition for the needs of the revolution. He managed to raise about $ 60,000. He also brought many Greek children back with him to Boston for their education. In 1828 he published his memoirs entitled “Historical Sketch of the Greek Revolution”. Samuel Howe remained active and politically involved until the end of his life. He made a last trip to Greece in 1866, to carry relief to Cretan refugees during the Cretan Revolution. 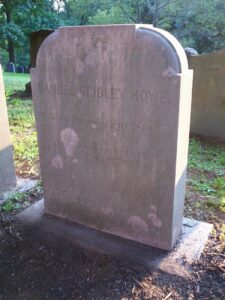 Howe died on January 9, 1876. His remains are buried in Mount Auburn Cemetery in Cambridge, Massachusetts.