Doctor of the Greek army

Hasan Agas Kourt Alis was a full-blooded Turkish doctor. However, he ministered to all Greek combatants of the Greek Revolution and he was announced by the Greek State officer after his death.

A Turk against his nation

Hasan Agas Kourt Alis was born before 1800 and lived with his family in Atalanti, a town in the centre of Greece. He was working as an empirical surgeon, when the Greek Revolution burst in his town and his family was slaughtered in front of his eyes. Although he lost his wife and children by the greek forces, he offered his medical services for the Greek cause. His name is mentioned in the Memoirs of the army general Makriyannis, as he cured several Greek fighters. In 1822 he settled in Acropolis on the side of Odysseas Androutsos, when he became the chief of Athens. He supported the Greek fighters while they were confined in Acropolis during the siege of the Turks. After the fall of Athens, Hasan Agas Kourt Alis moved in Halkida of Euboea, where he lived until his death. There, he was married for the second time to a Turkish woman. He continued offering his services as a surgeon until he got blind, sio he started giving medical lessons to young Greek and Turkish doctors. The Greek State granted a pension to his wife after his death as it was used to all the families of the Greek fighters of 1821. 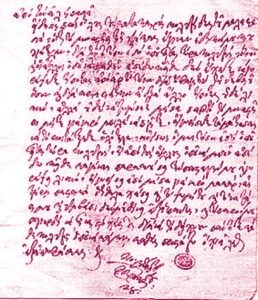 In the Department of Manuscripts of the National Library, a letter of Hasan Agas Kourt Alis’ wife has been saved in the official registers of fighters of 1821, which dates back to 1856, when her husband had already died.